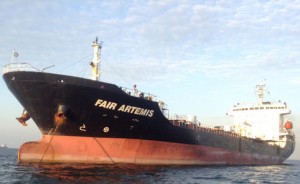 This last week we had a major incident in maritime security, the hijack of Greek owned tanker MT Fair Artemis operated by Fairdeal S.A..

To take the events from the top, ‘Fair Artemis’ was operating in offshore Ghana waters on 04/06, with the last contact being made in 18:00 hrs. In 05/06 the vessel was declared as missing and a search for it was initiated. Subsequently an unnamed Ghanan official stated that the coast guard of Ghana received in 06/06 a distress signal from the vessel claiming that it was hijacked and looted 36nm in Togo national waters. Particularly the last clause should be taken with a pint of salt, as West African nations generally try to fend the blame from them. Such was the case of MT Kerala last January, were Angolan officials claimed that the hijack was staged by the owning company and that no piratical activity occurred within their waters, a claim which of course is not even close to be confirmed yet. Regardless of the vessel’s position, its whereabouts are until now unknown along with the condition of the crew.

Piracy in West Africa and particularly the Gulf of Guinea has traditionally originated from Nigeria’s Niger Delta, which serves as the node for all such activity in the region. Togo had a surge in pirate attacks in 2012, which quickly abated in 2013 where the phenomenon relocated in Nigeria once again. In 2014 piracy incidents in the region have increased by 30% with tankers being the prime targets of the attacks.

The main reasons for such a surge are:

Furthermore in the Gulf of Guinea piracy does not involve kidnap and ransom as is the case in Somali piracy, but instead the vessel is usually steered in a pirate haven where its cargo is looted. This in turn creates danger for the crew as they hold no value for the criminals, thus it can be brutalized at will.

For the above reasons we strongly suggest that vessels transiting the region exercise extreme caution and adhere to the latest version of BMP to the best of their ability.