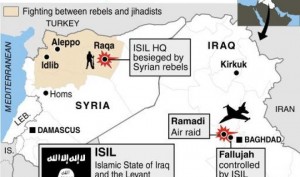 Last week saw the rise of an unexpected danger in the Middle East, the radical Islamic ISIL (Islamic State for Iraq and the Levante), an offshoot of al Qaeda that operates in Iraq and Syria. Iraq is a country populated by three distinct groups, Sunni Muslims, Shi’a Muslims and Kurds, with the Shi’a being the majority. After the US intervention in the country in 2003 the later came to power and conducted along with their US allies counterterrorist operations against the radical Sunnis (then called al Qaeda in Iraq).

However two factors changed the largely successful approach in the country. The first was the Syrian civil war, where Sunni radicals and al Qaeda supporters fought against President Assad who belonged in a different Islamic tenet, the Alawites. This served as a rallying banner for Sunnis around the world to come in Syria and fight for an Islamic State. The second factor was the departure of US troops from Iraq last year. With only the weak Iraqi army to keep them in check and with a wide conscription pool from the Syrian Civil War, the old objective of an Islamic State in the Middle East was again realizable.

This past week ISIL launched attacks that took Mosul one of the largest cities in the country forcing the President to issue a general conscription to counter the threat and allied Iran to send a contingent of troops in the country.

How this Affects Maritime Industry?

Besides the apparent instability caused by a worldwide crisis there are two more factors that we have to take into account with this crisis.