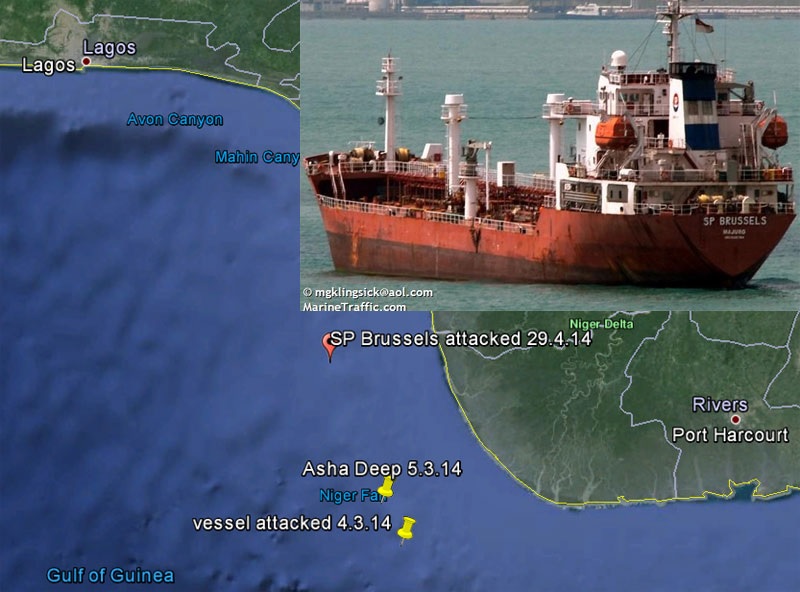 This past week bore a particular interest for MARSEC as it recorded the first killing of a seafarer by piracy for 2014 in West Africa. Particularly on 29/04, SP Brussels while transiting from Port Harcourt to Lagos was attacked by two armed pirates. The ship’s master raised the alarm and the crew mustered in the citadel. What followed was an exchange of fire between the on board security team and the pirates, that resulted in the death of the later. After the situation ended and the crew left the citadel, it found the vessel’s Chief Engineer dead and the third officer wounded. Both men were hit in the exchange of fire between the security team and the pirates.

Now the true nature of the security challenge in the region is highlighted. This is that by law, the security providers in Nigeria cannot be only privately contracted but local military forces must be utilized who are authorized to carry weapons. Are these forces properly trained? do they meet even remotely the strict criteria of standards (like ISO/PAS 28007) that well reputed Western security companies do?

In practice this means that if we just look into the causes and facts let’s try to initially analyze this severe incident: Was watch properly set? by whom? were there only locals or together with private sec. operators? how were the rules of use of force implemented? When did the security team open fire and how? Was there any training or drills on board for the crew? and so many other questions.  Unfortunately in the ensuing crossfire we had the tragic death of a seafarer and the injury of another.

Furthermore there are a few more points to be made on the incident. First of all for SP Brussels it is not its first attack in the region. It had also been hijacked in 2012 with 5 hostages taken who were later released. This leads us to another point: Was the incident  an isolated occurrence? Regularly vessels operating in the area are attacked for their cargo, particularly oil. SP Brussels was a small and slow vessel with a small crew, thus it was a prime target for piratical activity, hence the second targeting.

All these lead us primarily to the thought that maybe Nigeria should re-evaluate the situation and consider allowing properly trained teams with adequate firearms and security equipment – even along with their military – to efficiently protect the vessels, cargo and most importantly the life of the seafarers.