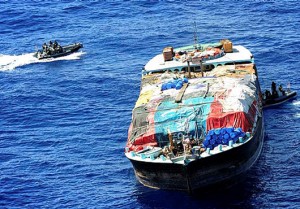 Bringing Terrorism to the Indian Ocean

In 15/05, an Australian Navy warship, HMAS Darwin, patrolling the coast of Somalia seized a total of 449kg of heroin ($123 mn value). This brought to the forefront again the ways that Somali terrorist groups, particularly al Shabaab, an al Qaeda offshoot, operating in southern Somalia acquire their financing.

Initially the goal of al Shabaab being strictly politico-religious forbade it from embarking in petty crime. Thus their source of financing until 2010 was from other states that either supported their radical cause (e.g. Saudi Arabia), or that wanted to destabilize the targets of the terrorist group for strategic reasons (Eritrea). Gradually however the group wanted to achieve a greater degree of independence from state actors and came to terms with the local gangs that operated in the country since the mid-90’s. These groups included drug and human traffickers, pirates, extortionists and local warlords.

Crucial to the group’s operations was the strategic port city of Kismayo. Kismayo is the third largest city in Somalia, so it can serve as a conscription pool for anyone that controls it. Additionally it is the largest port in the country allowing the conduct of illicit trafficking. Needless to say that the city was recognized for its strategic significance by the organization’s opponents and in 2012 it was recaptured by the Federal Somali forces. This dealt a severe financial blow to al Shabaab which had to find other sources of income.

These events lead us to today where al Shabaab turns to its old partners and provides training, weapons or international political connections, in exchange to money from the group’s illegal operations. Last week’s seizure was proof of this operation with al Shabaab receiving about 20% of the total income from these operations. Practically this means that al Shabaab is a partner to most illegal activities in the most lawless country in the world. The majority of these activities take part in the maritime element (piracy, trafficking etc). For this reason we should be very careful before we consider al Shabaab done, as the manpower, the weapons and apparently the business infrastructure are all still there, looming their threat still.