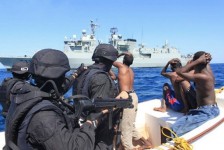 March 2015 – British prosecutors have worked with their counterparts in the Seychelles to convict 126 Somali pirates in the last four years, while with the measures taken we have nearly two years without a reported commercial hijacking off the Horn of Africa. Attacks are at their lowest level since 2006. The region, which contains one of the world’s busiest shipping lanes, has been suffering regular attacks from pirates since 2005, with the number of hijackings peaking at 52 in 2009. As part of the total efforts to tackle piracy in the region, British prosecutors have been based in the Seychelles since 2010. All were funded by the UN and the British Foreign and Commonwealth Office (FCO), and in that … Continue reading