126 Somali pirates convicted in the past four years 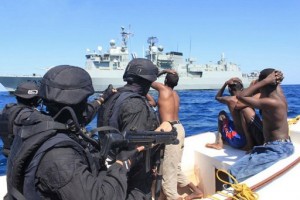 March 2015 – British prosecutors have worked with their counterparts in the Seychelles to convict 126 Somali pirates in the last four years, while with the measures taken we have nearly two years without a reported commercial hijacking off the Horn of Africa. Attacks are at their lowest level since 2006.

The region, which contains one of the world’s busiest shipping lanes, has been suffering regular attacks from pirates since 2005, with the number of hijackings peaking at 52 in 2009.

As part of the total efforts to tackle piracy in the region, British prosecutors have been based in the Seychelles since 2010. All were funded by the UN and the British Foreign and Commonwealth Office (FCO), and in that time they have personally conducted the prosecution of pirates, provided legal training to prosecutors in-country, and advised on equipping local justice systems with the necessary framework to tackle piracy across the region. The Seychelles is now one of the world’s leading jurisdictions for the prosecution of pirates and has been commended by the UN for its part in prosecuting piracy.

Patrick Stevens, international director at the British Crown Prosecution Service said, ‘from 2007-8 onwards piracy off the Horn of Africa from Somali pirates reached alarming levels. The attacks had a debilitating impact on both commercial shipping through one of the world’s main shipping lanes, but also had a human cost, as Somali piracy is characterized by the taking of hostages in order to obtain money via ransom’.

The prosecutors have had to overcome hurdles to prosecutions such as the difficulty of locating and securing the attendance of witnesses from rural areas of Pakistan and Iran. They have also become experts in naval and pirate terminology, which has been vital to their regular advocacy before the courts in such cases.

The majority of the pirates have now been repatriated to Puntland in Somalia where they will serve out their sentences which range from 2 to 24 years’ imprisonment in UN approved prisons.

The international community responded to the problem of piracy among others by sending large multilateral naval forces to conduct counter piracy patrols in the Indian Ocean region, to secure a safe transit corridor for shipping and an ability to disrupt pirate attacks. However these naval forces were often forced to let suspected pirates go because the criminal justice mechanisms were not in place to enable prosecution.

Transfers to Somalia were not possible and neighbouring countries such as Kenya became overwhelmed. Some countries (e.g. US, Holland, Germany, South Korea) prosecuted pirates in their own courts but this was both expensive and not sustainable.

The Seychelles requested assistance after pirate attacks began to affect their fishermen, trade and tourism. The CPS sent its first prosecutor to the Seychelles to assist them to prosecute piracy in 2010.