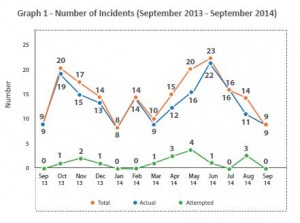 Siphoning Of concern were the Category 1 incidents involving siphoning of ship fuel/oil which indicates a decline in number of incidents reported in August 2014 and September 2014 due to ongoing collaborative efforts of the maritime enforcement authorities, and the shipping industry. However, the ReCAAP ISC urges the authorities and all stakeholders not to be complacent.

Masters and shipping companies are urged to carry out their ‘risk assessment’, conduct internal checks and enforce vigilance at sea to minimise the risk of boarding especially during hours of darkness. At Anchor, Berthed or Underway While there has been a decrease in the number of incidents reported at some ports and anchorages in Indonesia; ships anchored off north-east of Pulau Bintan in the South China Sea had been boarded more frequently. Mostly less significant and petty theft in nature, these opportunistic robbers also boarded ships while underway in the eastbound lane of the Traffic Separation Scheme (TSS) in the Straits of Malacca and Singapore. Conclusion ReCAAP ISC urges the littoral States to step up surveillance, maintain continuous presence and conduct more regular joint coordinated patrols in the Straits of Malacca and Singapore, and advises ship masters to exercise extra vigilance when traversing areas susceptible to piracy attacks and to report all incidents immediately to the authorities of the coastal States. Timely reporting is essential.