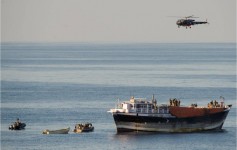 On Saturday 18 January 2014, the French EU Naval Force (EU NAVFOR) Somalia Operation Atalanta flagship FS Siroco, in cooperation with Japanese assets, released the crew of a Dhow that was suspected to have been used as pirate mother-ship. The flagship apprehended 5 suspected pirates believed to be responsible for an attack on an oil tanker in the Gulf of Aden a day earlier. The oil tanker issued a distress call to the UK Maritime Trade Operation (UKMTO) on the evening of Friday, 17 January, reporting to be under attack. According to the reports, the attack was repelled by a private armed security team embarked on board the oil tanker. The skiff then headed to a dhow which lingered nearby. … Continue reading